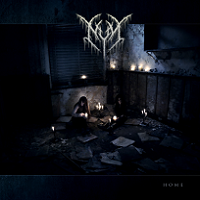 The female duo aspect of NYX will no doubt be the angle everyone will try to exploit when it comes to the pair’s Home debut. Even with the quasi-breakout success of Mykur, the idea of females taking a commanding role in black metal is difficult for some to grasp. Considering women were usually cast as role-playing keyboardists and/or objects of sexual desire or satanic torture, the fact they’re starting to venture out on their own may ruffle more than a few of the old boys’ feathers. That’s their problem, no one else’s.

Hailing from the Baden area of Germany, NYX consists of Blitz (drums/vocals) and Vinterbarn (guitars/vocals). Evidently, the two have their (black) hearts in the right spot, as Home goes to work with several primary tenets of classic BM, the most obvious being the devilish guitar permutations put together on “Beyond” the mystical “S.ave O.ur S.ouls,” which features an excellent blend of raspy, and clean-sung vocals. It’s in this trade-off where NYX gain the most leverage – the natural beauty and softness that comes with female clean vocals are just the right offset to some of the more heavy-handed offerings ala “Going On.” Plus, there’s a natural gravitation to those hallowed, grandiose chord movements that came out of Norway a few decades ago – NYX has that down too.

Home is good enough to where the double-takes over two women holding down the BM fort may be in long supply. That’s just the unfortunate reality of our little scene. However, the smart folks at Agonia no doubt recognize what they have with Blitz and Vinterbarn, a legitimate, no-gimmicks black metal pair that is off to a pretty rollicking start with Home. And with the aid of Enthroned bassist Phorgath in the studio, it appears there’s plenty of the right ‘heads around a band who could get happening quite soon.