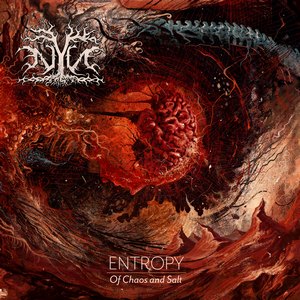 One could probably just call the latest NYN album “Chaos” and be done with it. Of all the albums in recent memory, this one is just about as chaotic you can get with technical death metal and still get away with calling it music. Entropy: Of Chaos and Salt is a downright frenetic experience that should leave you a bit breathless after the first listen (or even the first song). But it’s also more than unbridled chaos.

This time around, NYN mainman Noyan Tokgozoglu joined forces with guitarist Fountainhead (ex-Obscura) and keyboard/synth Jimmy Pitts (seemingly the go-to for tech death synths recently) and the results speak for themselves. NYN hits you like a ton of bricks with their assault, which is so drenched in dizzying tech-death wizardry that it will all but barrel you over. Just like albums from First Fragment and Virulent Depravity, it’s the type of tech/prog that will make you grin. After the first few tracks, the band tries their hat at something more progressive (see “Embrace Entropy” as the shining example), which gives the listener a chance to admire the surroundings at a slightly slower pace.

All the while NYN sticks out from the tech-death horde by doing a few things. The intensity is one of those things for sure (“The Hallway” will make your brain scream), but a rather unique feature is that of the exotic flavor that each track brings with it. Melechesh and Orphaned Land come to mind here, with proggy rhythms exchanging bits with Middle Eastern flair. Some variation on the vocal front doesn’t hurt either, with a few near power metal-esque lines making an appearance, along with some vocoder experimentation to coincide with a number of barks, roars, and screams keeps it as interesting vocally as it does instrumentally. Each player here deserves some accolades for their contribution, and at an hour-long in length, Entropy does something that most progressive/tech material doesn’t – stays fresh and relevant.

Entropy is a dense listen that, in all honesty, the non-tech/progressive community will probably have a tough time getting into. But for those who live and breathe this stuff, it’s the type of thing that will melt minds and leave you salivating for another listen. NYN are really onto something here, and prove they have the chops to be at the head of the scene.