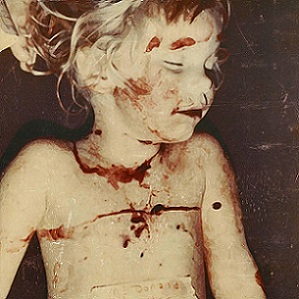 Would you look at the cover…wonder if the Norwegian chain mail gang of the early ‘90s would get a kick out of it, or, just roll their eyes, flip their hair, and get back to work. Since Numenorean is unable to shock nor sway sonically, the NSFW cover of Home achieves its intended purpose of netting the Calgary-based post-black metal outfit some attention. Now, the troublesome rub here is that the band are releasing their debut right as the post-BM movement is reaching its predictable nadir, which in turn, makes Home a transient release.

You know the drill here: Long, if not arduous songs, melody-driven breakdowns sure to enthrall the BM newbies, and, a cavalcade of sideways riffing and shrieks. Indeed this is formulaic stuff, which isn’t necessarily a fundamental issue, but vetting Numenorean against more seasoned bands like Abigail Williams and Vattnet Viskar reveals the Canucks’ shortcomings, like, the unnecessary shouts that infiltrate “Thirst” at its midway point. It sounds like a poor mish-mash of modern hardcore and even more modern black metal. (Gulp.) Aside from that, the band’s riff output is often a re-tracing of core BM riffing, sometimes spruced up by melody (like on “Thirst”) or catapulted through the same arenas our lovely friends across the pond in England have already perfected (“Devour”).

Really, just flat, scene-fitting, form-fitting stuff here; it’s like if you were to draw up what a North American “black metal band” was to look and sound like circa 2016, then there’s no need to look further than Numenorean. Had Home popped out five years ago, then sure, it could possibly cut through, but now…do we need more albums like this? Eh…