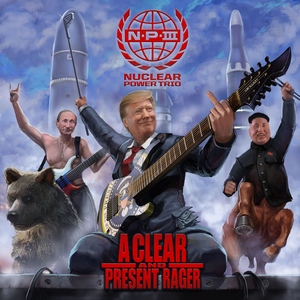 If an instrumental metal act consisting of Donald Trump, Vladimir Putin, and Kim Jong Un isn’t considered a supergroup, then what possibly could be? Not only do they manage to run a big chunk of the world, but their instrumental skills are to the point that they could start running the metal world as well. A Clear and Present Rager may have a clever gimmick to it, but the musical chops of these three players (allegedly comprised of Havok and Allegaeon members) is more than enough to back up any hype.

The best part about A Clear and Present Rager is just how funky it is. The basswork is incredibly playful, and it gives the music some bonafide sway and bounce to it throughout much of the runtime. While much of the instrumental scene strips away a lot of the move and groove in attempt to flex some instrumental muscle, Nuclear Power Trio has found a way to really capture the best of both worlds. Tracks like “Mutually Assured Seduction” (the titles on this are fantastic across the board) feature some mindblowing guitarwork and some flatout gorgeous leads/solo material, it stays incredibly catchy and inviting to the non-prog musician. It’s refined and elegant, yet entirely approachable. Some great chunks of funky groove help tremendously with this (see the title track), and allow the soaring guitar melodies to feel even more epic and grandiose by comparison. “The Fusion Collusion” is possibly the most danceable track of the bunch, and the danceable comment is not a stretch of the imagination. Between the exotic melodies, jovial basswork, and epic soloing, you will have a hard time sitting still.

A Clear and Present Rager is just plain fun. It has all of the over-the-top instrumental stuff you could hope for in this type of music, but each track is all but guaranteed to put a big old smile on your face as you stupidly try to do some air guitar to it and flail your feet around. More instrumental bands should pick up on the upbeat vibes that Nuclear Power Trio put out. Leave it to three leaders of the world currently to bring about an EP that easily be considered revolutionary.