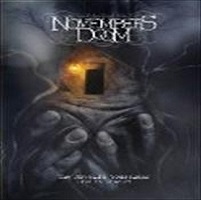 Now at their arguable peak, Chicago doom merchants Novembers Doom are now getting the live DVD

like Rain and the grueling The Voice of Failure. The band’s more melodic side is shown during “Autumn Reflection” (perhaps their best song

) and “With Rue and Fire,” both of which rely heavily upon the band’s potent mix of churning riffs and Kuhr’s overtly sincere lyrics.

Visually, there is not much to marvel at, as ND remains in one spot on stage throughout the entire set, with only Kuhr straying outside of the otherwise stoic nature of the band. The Belgium crowd, however, eats this up, offering up more enthusiasm for newer songs like “Dark World Burden” and “Drown the Inland Mere.”

Also included are three promo videos: “Rain,” “Autumn Reflection” and “The Pale Haunt Departure” along with fan made videos of “Twilight Innocence,” “Dark World Burden,” “Broken,” and “The Lifeless Silhouette.”

Now in the doom biz for over 15 years, Novembers Doom can do whatever they please. They may not be slaves to the road, but one can have such flexibility after two succeesive career-prolonging albums like Pale Haunt Departure andThe Novella Reservoir.