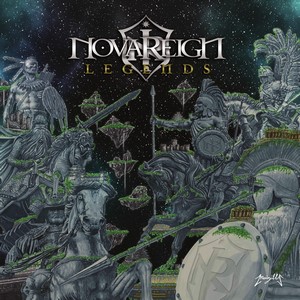 A new act from California, NovaReign have been behind the scenes for a number of years at this point, but with only a 2014 demo to their credit before this official debut through M-Theory Audio. Carrying the torch of power and traditional metal before them, and adding some shred (a la Dragonforce), there’s a lot of working parts in motion. Unfortunately, NovaReign haven’t managed to align all of them just yet.

The first impression one will get of NovaReign is that they play fast. Instant comparisons will fly towards Dragonforce in that regard, along with their often frantic and energetic playing. For a debut, it’s some pretty technically involved material, which would make sense, given the band’s lengthier existence. Nonetheless, the tempos are blazing at most points, and there are some points that are bound to make genre fans near giddy with glee from the musicianship (the fiery solos of “Black as the Dead of Night” come immediately to mind). Indeed, there’s a lot to like about NovaReign, from a highly proficient musical background, to David Marquez’s high-flying vocals.

Sadly Legends is an over-the-top fantastic 35-40 minute album sitting in the body of a bloated 64-minute one. As mentioned, the musicianship is excellent, but with the near constant battery of faster tempos, it all starts to blur together. There will be plenty of points, as the lengthy tracks progress, that will just seem empty. For all the flashy guitar heroics, there are just as many moments that will fall flat in your ability to outright remember them and recall them later. As just one example, towards the end of the 10-minute “Mace of a Fist” where this scribe swore they were on the next track only to have a final return to one of the earlier moments of the song. That sort of blurring is a major disappointment considering the level of musicianship at hand.

Legends should be a fun and vibrant trip back towards traditional and power metal glory, but it seems to falter almost as often as it succeeds. With some additional quality control, NovaReign could easily produce a ‘knock your socks off’ type record, but as is, Legends comes off a bit tepid and lands shy of its potential.