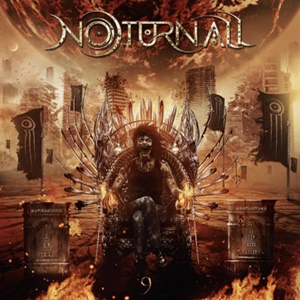 Containing players past and present with known entities such as Primal Fear, Angra, and Shaman, Brazilian progressive metal band Noturnall certainly gain a head start over most newcomers since their 2013 beginnings. 9 as the quintet’s third studio album originally hit the scene independently in the summer of last year – only to be picked up by Rockshots for a proper international release. What’s always been impressive about the breakout bands from Brazil (or South America in general) is the application of technique and fluidity to synthesize outside dynamic influences into something very competent and catchy – which Noturnall emphasize throughout these nine tracks.

When you have a stellar rhythm section that can groove and throw in those wild progressive runs at a moment’s notice, you might as well execute both to the fullest – which bassist Fernando Quesada and drummer Aquiles Priester deliver right away on opener “Hey!” as well through the speedier, Dream Theater-esque “Wake Up”. The guitar tone fluctuates between clean melodic comfort and a heavier, down-tuned edge to give much of “What You Waiting For” that darker, modern edge as the keyboard passage provide symphonic-like ambiance. And for those who desire a straight up power metal number in that older Helloween/Angra/Edguy vein, look no further than “Mysterious” – where the speed runs, double bass, and uplifting, delightful verses and chorus should make this track a certain crowd-pleaser.

The band also benefits from an expressive, potent voice courtesy of Thiago Bianchi – very powerful, weaving around the music while also giving it that melodic touch through proper note holding and background supplementation. He can handle the cyber-low evilness necessary during “Change”, while carrying the mostly acoustic-driven “Hearts as One” in a late 80’s throwback to the days of “Hole Hearted”-period Extreme. The Latin-percussive/guitar side also shines on the closing ballad “Pain” – not a typical power-oriented arrangement, where the multi-harmony vocals reverberate through the aural landscape as if ready to conquer arenas and festivals globally. Listeners should embrace Noturnall, as they understand the need for hooks in songwriting while still maintaining an adventurous, progressive metal stance in 9. Much like Angra, they serve up an intriguing, dynamic musical stew of a record – in turn grabbing listeners from a wider marketplace.