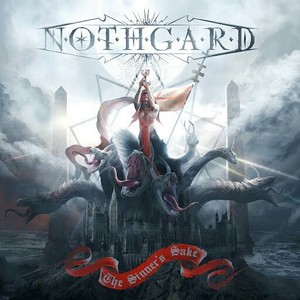 German melodic act Nothgard have been doing their thing now for about 7 years, with two previous full-lengths within that time span. The German part is what come as the surprise here, if you hear the band before doing any sort of research about them, as there’s plenty of Finnish comparisons that one could make on a blind trial. But nonetheless The Sinner’s Sake strikes a chord with those looking for some more epic in their melodic death metal.

With easily drawn comparisons to bands like Children of Bodom and Ensiferum, Nothgard’s sound has a rather similar approach to it. Galloping, catchy guitar riffs tend to ride high through most of the album, with a bombastic, upbeat tone that’s hard to shake (in a good way). Lots of focus on well-written solos and some good balance between mid-tempo romps and thrashier numbers. Compared to their previous album, the keyboards have seeped into the backdrop a bit more, but still provide an added flair from time to time. Instead the more technical riffs rightly take centerstage, providing plenty of flash. Strong cuts such as “Shadow Play” and “From Lambs to Lions” are rather energetic melodic death metal fodder, all but guaranteed to please genre fans. Unfortunately, much of the album relies upon the same formatting and a few of the tracks fall into the filler category, as the feeling starts to become to similar. They try to break things up with an emphasis on clean vocals with the closer “Sin Eater,” but by then it’s too little too late.

Nothgard have potential and have managed to enhance their vision over their three albums, however The Sinner’s Sake would benefit from some more variation and further removing the band from the CoB/Ensiferum sounds. There’s nothing particularly wrong with any of it, and has some shining moments, but it falls far too comfortably into melodic death metal tropes to really stand out. 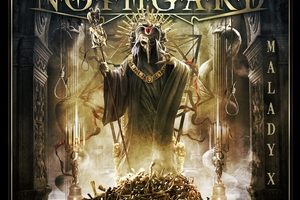