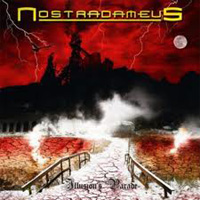 This is Nostradameus with an “e”…not Judas Priest’s Nostradamus, mind you. Since there are roughly 1.2 million bands out there barring the great prophet’s name, a little letter wrangling couldn’t hurt. It’s like when Andre Matos’ Shaman added in an extra “a” to become Shaaman. Those power metal bands on AFM – a sly bunch not to be messed with.

At any rate, what we have here with Illusion’s Parade is pretty much standard quo Euro power metal with a slight thrash edge. Nostradameus doesn’t do one thing particularly well, although the biting thrash crunch during “The Art of Deception” would suggest the band does have some balls behind them. On the other hand, vocalist Freddy Persson is rather ball-less (in the singing sense, obviously) and oftentimes clashes with the music when heavier moments (like “The Mariner” and “Armageddon Arise”) arise.

Persson does have his share of uplifting moments, just reference the soulful chorus of “Broken Soul (Virgin Mary),” which is probably the best song here. Since it stays more on the classic power metal side of the fence, Nostradameus is able to reign in a song that should tilt the balance in the power metal direction, but alas, it’s one of those few-and-far-between moments.

The main sticking point with Illusion’s Parade is how unmemorable it is. When you’re an unmemorable power metal band, tough sledding is probably around the corner, small tweaks to overused band and name and all…