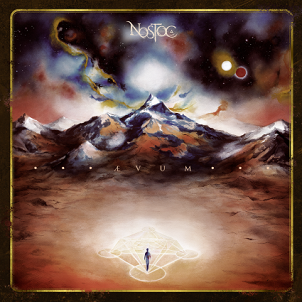 Somewhere between early Cynic (i.e. Focus) and Gojira lies Costa Rica’s Nostoc. Now, the idea of a metal band from Costa Rica trying to break through isn’t lost on us; the same applies for the just-as-good Sight of Emptiness. If anything, it provides additional fodder for Nostoc, who, puzzlingly are unsigned and appear to be unnoticed, at least in these quarters. Based off the technical persuasion and dynamic sheen that is found across Ævum’s seven longs, Nostoc should have little difficulty gaining further exposure..

The progressive element in Nostoc’s sound is pervasive, although that doesn’t entail the band heading off into pointless instrumental sojourns. Rather, the seven jams here are jam-packed with riff switch-ups, time signature changes and quick bouts of melody. While the somewhat brash “A Path to Ascend” weaves its way through the aforementioned Cynic-on-Gojira corridors, it’s the flood of rangy, brash riffing on “The Artisan” that really has some pop, not to mention the quick bass jam that emerges once the song has lift-off. Elsewhere, the turbulent “Transmute” and melodic guitar spiral-intensive “The Anamnesic Voyage” further supplement Nostoc’s cause as band capable of many progressive death metal bounds and leaps in a single song.

As indicated, Nostoc, for our money, is too good to remain in the unsigned realms. The stark technicality and immediacy of their songs is certainly of high value, showing that Costa Rica, for all its exoticness, can pop out a good metal band…or two. Ævum should easily shoot Nostoc through the progressive death metal ranks.