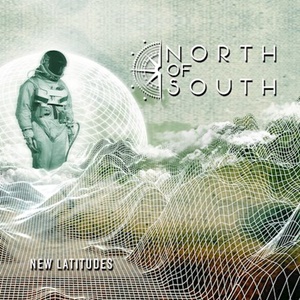 Let’s face it – although many bands claim to be unique, the idea of developing an original take in any genre is an uphill climb given the decades of bands and releases on the market already. Skepticism naturally takes ahold when throwing around multiple outside the box influences to make things work – fortunately in the case of North of South and their debut album New Latitudes, the band truly embraces a veritable musical stew approach that works for the progressive metal community to hopefully notice. Founded in 2017 through guitarist Chechu Nos, his philosophy of ‘there’s only one rule: there are no rules’ makes for a highly enthralling experience over the nine songs, as everything from jazz to Latin to melodic death and pop influences sprout organically into the mix, keeping the listener on high alert for deep dives into the interplay and songwriting.

Most of the songs possess this driving nature of interactive musical combinations – guitars, bass, and vocal melodies coming together often as one even if the drumming has more of the progressive, jazzy/off-time tendencies. Musical box-oriented keyboards give way to an extreme riffing/drum combination to start “The Human Equation”, while the verses lighten the atmosphere into more of a Haken/Evergrey swirl although spacious 80’s synth elements and acoustic guitars embellish the proceedings. It’s rare to have a band add aspects of The Police, Opeth, Amorphis, and the Red Hot Chili Peppers into their collective bag of tricks, but North of South aim to challenge the listener – even in the sense of keeping their ideas focused to a tidy time frame as only two songs venture ‘north’ of five-minutes (“Faith Is No Hope” at 5:30 the longest). 90’s alternative music factors into the jangly guitars and addictive vocal harmonies for “Nobody Knows” – an ideal catchy number that features a bit of that Latin flavor on the drum side, an interesting instrumental section with orchestration textures and a definite ‘pop’ nature to that chorus. Choosing to forego a multi-octave, high range vocal approach and sitting more in that pop/alternative vein also aids North of South in the hopes for originality – the juxtaposition as blast beats appear underneath “Time Will Tell” the clear example that polar opposites can work if given enough care and craft to the direction of the song at hand.

Favorites will change daily, as New Latitudes contains layers of musical content to discover through successive playbacks. Smartly keeping the record at 35 minutes, North of South will be a progressive metal / rock act talked about in circles of the internet community, swarming to get this band more attention and hopefully onto those prime festival slots for exposure.