Norska – Too Many Winters (Brutal Panda) 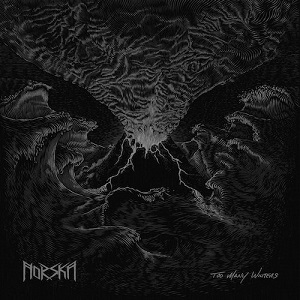 YOB bassist Aaron Rieseberg also holds down the low-end in Norska, giving the Portland-based doom/sludge troupe instant cred, or at least somewhat of a familiar name to get its own name out there. Last properly heard from via their self-titled 2011 EP, Norska’s subsequent delay in releasing new material has done little to quell the band’s ability to churn out top-heavy, mountain-moving sludge, which, if you look at Too Many Winters long and hard enough, you could consider these gents as the rightful cross between Neurosis and the aforementioned YOB.

Norska doesn’t belabor simplicity the way its competing bands do. Sure, the riffs are caked in the familiar overdrive-upon-overdrive guitar tone where a simple brush of the low-E creates a cacophony, but there’s a lumbering noise quality to opener “Samhain,” sounding like Neurosis would if its members were bonked out of their minds on caffeine. A track like “Samhain” isn’t Norska’s long suit; rather, “This is Why We Can’t Have Nice Things” emerges as the album’s high mark. A veritable deep dive into the slow-crushed and churned world of post-nuclear doom, the song is both gentle in its delivery and savage at the same time. It should also be of note that Jim Lowder’s vocal performance here is too good to nearly be swept away in the onslaught of tone and sludge boulders. (He’s the focal point on album closer “Fire Patience Backbone,” too.)

Because doom/sludge lacks enough enticing qualities, there’s always the hope (from this scribe, at least) that less bands would come out of the woodwork. While there’s a sufficient lack of interesting bands within this realm, Norska (which is Swedish for “Norwegian,” by the way) have turned in an off-the-beaten-path release via Too Many Winters, an album that may instill (slight) hope that doom/sludge can maintain some validity.