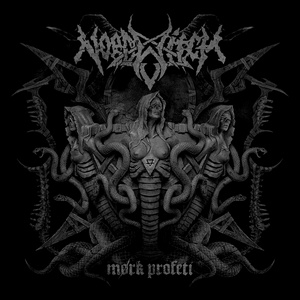 One thing that never gets old is finding a band that just popped out of the wordwork and delivers an album that blows you away. Ukranian act Nordwitch has simply done that on their debut album, Mørk Profeti. Blackened death metal that impresses with its songwriting, and sense of melody that knows how to get in at the right points without overdoing it.

Somewhere along the way, blackened death metal relegated itself off to more of a sideline position (as opposed to say, old school death metal or tech death), and it’s hard to grasp why with the strength behind Mørk Profeti. Nordwitch embrace the genre without resorting to tossing in keyboards mind you, instead enveloping the cold riffs and blastbeats into a death metal format that carefully incorporates more melodic influences as well. To that end, one almost wants to add a “melodic” to the blackened death label, but it seems like it would give the wrong impression of the band. Nonetheless, melodic splendor does indeed come into play, particularly on the mid-paced “To Nord Gods,” in which an acoustic opening moves onto a fist-pumping melodic riff. But it’s not an isolated incident, with the leadwork of “No Regret” and frantic, blackened melodies of “Lady Evil” being added highlights. And fear not, there are plenty of explosive blasts and razor-sharp riffage with tracks like “Dominion” and “The Call to an Ancient Evil.” Overall, there’s a pleasant flow to the album that pulls you in with this combo of melody and aggression. Plus, the production gives a suiting feel to the performance, not really raw but not really surgically clean either – exactly what this type of music needs.

Nordwitch have a real sleeper hit on their hands with Mørk Profeti. A classic death metal approach that’s enhanced with blackened melodies that intertwine without compromise. There’s something to satisfy much of the extreme scene here.