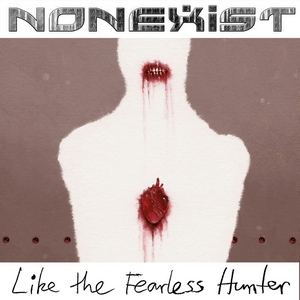 Johan Reinholdz is no stranger to the Swedish scene. With Andromeda showcasing his proggier side, Skyfire bringing out the symphonic melodeath, and he has recently joined Dark Tranquillity. Then there’s Nonexist, which has pushed out more of a thrashy death metal output for almost as long as Andromeda has been around. Like the Fearless Hunter displays all of Reinholdz’s fortes and works almost like a melting pot of an album.

From scorching death/thrash to melodeath to old school death metal to proggy instrumentals, you can find an eclectic mix of it all on Like the Fearless Hunter. The album’s strong suit is that it doesn’t start to feel like a jumbled hodgepodge of metal as you are listening. Opening on a ripper in the form of “Strictly Sadistic Intent,” the title more or less explains its objectives – it’s a quick in and out track fueled by thrashy adrenaline. But even here, a nuanced melodic lead through the chorus helps bridge it all together. “Dark Satanic Mills” has an almost old school death metal feel to it. The tempo of it all is raging, until a falsetto drops midway through the track and it barrels into grooves and a noteable solo for the second half. More progressive notes enter the mix with “Emerging from a World Below,” which also has an eerie sense to it – from the clean vocals and haunting synths, as well as the much slower tempo compared to the opening numbers. But it too switches things up and goes into a more aggressive mode, again helping to weave the varied cuts together. Even instrumental cut “Fear Corrodes the Soul,” which lavish in exceptional guitar leads and ear-catching solos, doesn’t forget about some bottom end crunch.

Never at a loss for energy, even as it jumps from tempos and styles, Nonexist’s latest release shows a continued high-water mark for Reinholdz and company. Fueled by aggression, but nuanced by melody, Like the Fearless Hunter is nothing short of consistent and thoroughly engaging.