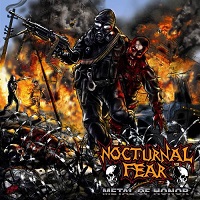 Michigan death-thrash act comprising two official members in Rev. Chris Slavehunter Ph.D on guitars and bass with Aggressor on drums as session screamer Doomy G. Blackthrash handles the vocals. They’ve been on the scene for a little over a decade, as Metal of Honor is their fourth album. Do not expect any nods to breakdowns, wimpy melodic choruses or slick computer Pro Tools production maneuvers – these 10 songs pay homage to a time when musicians struggled to gain respect, playing from the heart with selling out an ill-advised option.

“Death Before Dishonor” opens with a couple of speed guitar runs that combine the ferocity of Destruction with the painful attack of Kreator- before the main riffing brings things to more blasting proportions a la Dark Angel or maybe Warbringer. “Reign of Terror” is a three part instrumental trilogy, spoken word samples from fantasy movies sprinkling in amongst the otherwise double bass driven arrangement, melding together early Metal Church with smaller segmentations of their German heroes. Sodom.

Lyrically Nocturnal Fear stick to military and war themes, the titles of “Nuclear Deathstrike” and “Soldiers of Hell” reflecting a pro-US stance. Most of the tracks clock in around the 5-6 minute range, and I do think they could pare down some of the instrumental breaks slightly but this probably goes against their streamlining philosophy.

Skulls in their logo plus relentless dedication to the cause of death/thrash, Metal of Honor may share an album title with 80’s East Coast traditionalists TT Quick, but Nocturnal Fear instead live for a heavier, faster headbanging experience. Good enough for me to seek out their older back catalog.