Thursday, 8th May 2014 By Bridget Erickson 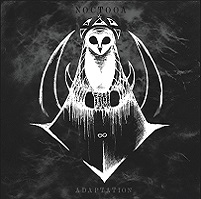 With pity, it’s true. We crazy Californians are always taking what we like out of things and nonchalantly meshing it all into some stupid “unique” self-identity. And you know what? It can be really annoying sometimes. Take Noctooa, those typical Californians! They’re such an accurate representation of California, it’s awful. What is this, melodramatic movie music? Nope! It’s just more undesirable neo-folk. Not that there’s much of a difference between those two genres these days with the continuing-to-spread infestation of Tolkien fanatics, pseudo/neo-hippies, and modern (often confused or lost) spiritualists.

Adaptation is stiff all-around. Every song on this record has little to none musical variation and absolutely no flexibility. Noctooa do have musical quality, but that’s a completely different concern. With Adaptation, they seemed to have limited themselves to one distinct and particular sound. It’s a nice sound, sure, but perhaps too feathery. What else is there?

They have some nice musicality with appeasing strings of cello and soothing strums of guitar. But, contrary to some claims, their music isn’t exactly soothing and it probably won’t “soothe your spirit” either. Songs like “Poly-Dimensional” and “Glass Empire” create atmospheres that emit a feeling that something exciting is bound to happen or someone is headed somewhere to do something sensational, but nothing happens. They toss in chimes, bells, a didgeridoo, and basically whatever other instruments are available or maybe seemed cool to them at the moment. However, what’s most important in selecting instruments for a record is to first know how the instruments will be played, not simply including them. That’s a major factor Noctooa seem to have dismissed.

On the gist of it, they’re a warmhearted neo-folk band with sky-high spirits and lots of healthy self-assurance. The problem here seems to be that Noctooa are too nice to have any part in the metal scene. On top of that, they’re much too light to even pretend like they’re playing it dark. And apparently they forgot how aggressive owls can be, because it’s a bit baffling to figure out why their chief symbol is the owl. But really, who gives a hoot?