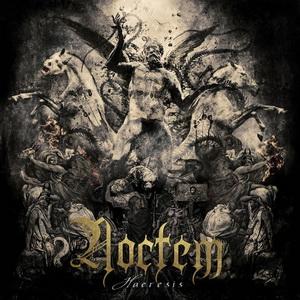 Perhaps cognizant of how close they were to full embrace of Dimmu Borgir/Septicflesh worship, Spain’s Noctem have done what any savvy band would do: they’ve gone back to basics. Now, a basic album Haeresis is not, but in relation to the band’s symphonic, sometimes ‘much’ Exilium, Haeresis is unrestrained, fertile, if not explosive black/death metal, pulling away from the pomp huffing and puffing. It’s an approach that trains on similarity and repetition, but slots Noctem as the Spanish Belphegor, which isn’t a token nomination, either.

In contrast to the Austrians (that would be Belphegor), Noctem is heavily reliant on speedy, agile riffing with a melodic tinge. And while these cuts are largely without curves and dives (which Exilium was so prone to), the snaking “Through the Black Temples of Disaster” and brutal (for lack of a better term) “The Submission Discipline” find Noctem easily navigating through off-to-the-races tempos and extremity. It’s a somewhat limited approach, though, and it bogs down the latter portion of the album, with a jam like “Conjuring Degradation and Morbidity” failing to resonate. But, if the onus is on would-be climatic cuts like “Whispers of the Ancient Gods,” then Haeresis will land appropriately.

A pivot album that is on the same level as its predecessor, Haeresis is full-tilt, with only a few spare moments of restraint and consideration. It’s a dangerous trap Noctem could fall into, as many a lesser bands have made a career out of re-writing the same blast-a-thon numbers. As for Noctem in the present with Haeresis, it’s best to batten down the hatches and watch the Spaniards go at it.