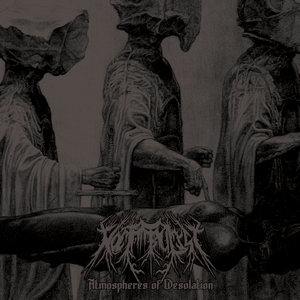 The age of thick, bottom-heavy death metal with dissonance is one that has been set upon us by bands like Gorguts and Ulcerate. With more bands staking their claim to the genre, the areas of expansion seem to be that of increasing the atmospheric nature of it, or tightening up the blistering heaviness. The Colorado-based act of Noctambulist flirt with both, but certainly moreso with monstrous aggression.

Atmospheres of Desolation hit the mark sonically, with a gritty sound that is tailor-made for bands like this. The oppressive edge to the music gives it a dark and ominous vibe from the start, as the brief introduction “Dimming Lights Illuminate” makes readily clear. The type of material that feels like it could swallow you up at any moment, the sheer venom that other songs like “Abnegation” and the title track deliver is an almost constant stream of bludgeoning and unease. But they do take things a bit more slowly at other points in the album, such as “Jubilant Cataclysm,” where things trail off toward the end of the track, but also in the more mid-tempo crunching at other points throughout. Also notable is the added vocal variation, something that many bands steer away from, but Noctambulist utter bellows, growls, and screams in such a way that manages to impress.

Atmospheres of Desolation doesn’t bring any unusual developments to the dissonant death metal platter, but they do know exactly how to execute the formula to near perfection. For a debut offering, the level of grit and gloom sets Noctambulist as a band worth investigating and keeping an eye on as they press onward. With an equally strong focus on atmosphere and darkened riffs, they may very well find themselves near the top of the heap in this setting.