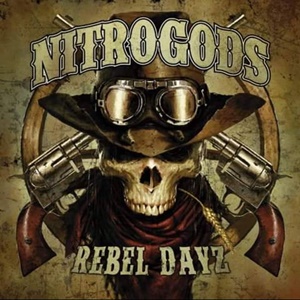 There’s nothing quite like straightforward, hard rock ‘n’ roll. Especially when you have seasoned players in the mix like ex-Primal Fear members guitarist/vocalist Henny Wolter and drummer Klaus Sperling – who felt the need with vocalist/bassist Claus ‘Oimel’ Larcher to develop a power trio formula in Nitrogods. They’ve released three albums since forming in 2012 – moving up to headliner ranks in GAS territories (Germany, Austria, Switzerland) setting the stage to full-length four for Rebel Dayz. Written, recorded, and self-produced, these gentlemen continue to crank those anthems up to ten, resonating in that bluesy/whiskey-laden platform that put Motörhead, Nazareth, and other energetic artists into the hearts of fans during the 70’s, 80’s and beyond.

Nothing fancy about this material – the hooks come quick, the choruses basic and addictive, while the music just blasts easily from your favored listening device to cause head shaking, foot tapping, spasmodic body swings. Between Claus’ gravel/Lemmy-soaked voice and Henry’s occasional lead vocal supplementation (think a lower register Dave Grohl), the diversity brings many shining moments for “Zoom the Broom” on through to the more commercial-oriented “415 DV”. Henry gravitates towards those bristling power chords that send shivers, Claus and Klaus falling into line to accent the transitions while the axe man delivers thoughtful, bluesy breaks that mesmerize as “Get Lost” and “Go Fast” (the latter using some bottleneck slide accents) become easy standouts. For many bands, fourteen songs on a record would be four too many – when it comes to Nitrogods, the material just whirls by in tight three to four-minute windows that you can’t get bored, as the next idea churns a different combination of chords and tempo angles that appeases. Drinking, cars, good times – these are the topics that generate the most satisfaction for the band, as “Blind as a Stone” and “Walk the Track” illustrate.

Considering the demise of Motörhead and unknown recording status of AC/DC at present, Nitrogods fill that gap with new songs and old-school attitude quite nicely. Rebel Dayz hits at the heart of hard rock and early metal fans alike, providing smooth tunes to ease your worries and bring a smile to your face. 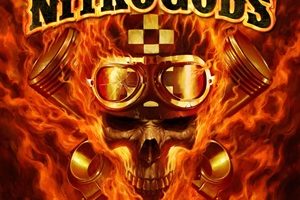