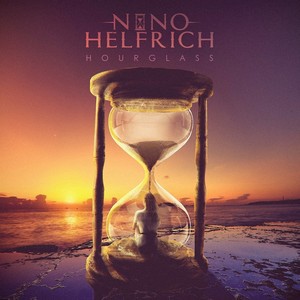 Following up from a completely instrumental album, Dead Bodies in Motion, guitarist Nino Helfrich is back. This time he has brought some voices to the table though, in fact some familiar ones that are bound to raise some excitement in the hearts of many melodeath fans. This being a trio of Bjorn Strid (Soilwork), Chris Clancy (Mutiny Within), and Christoph Wieczorek (Annisokay).

A few might be thinking (at this scribe was initially), that this sounds a bit like I, Legion. While not entirely off-base, especially considering the involvement of both Strid and Clancy, it’s Helfrich’s guitar playing that gives Hourglass the most ringing endorsement. Sitting well within the more melodic end of the melodic death metal framework, some obvious lines will be drawn towards Soilwork/Mutiny Within, but the slow/mid-tempos really bring this album to life. The emotive power of the title track (also wisely utilizing Clancy’s soaring singing), when a bit more restraint is used on the tempo, where the richness of his leadwork is fully explored. There’s a lot of stunning leadwork and solo material that one can find, with “Apocalypse Inside” saving one of the best for late in the album. Helfrich can flex the more aggressive riff muscles when needed, a la opener “Your Own Way” or “Day of Reckoning” to engage the classic, modern approach and enhance with some catchy riffs and leads. Vocally, Strid takes four of the eight tracks, with Clancy on three (Wieczorek therefore, with “Let Me Sleep”) and it’s exactly what you’d expect from these modern metal champs.

Utilizing some high-caliber talent should draw some more eyes to Nino Helfrich’s guitar playing. But while you may come for the vocals initially, Helfrich proves himself to be of the same caliber as his guests (see his previous album on Bandcamp for further proof) and a promising guitar prodigy. Catchy and engrossing – Hourglass is a no-brainer if you like modern metal.