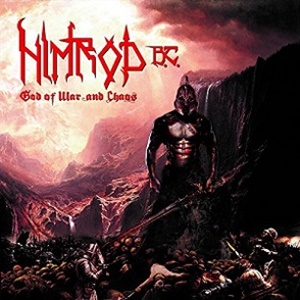 An early player in the Chilean power/thrash scene during the 1980’s when their underground scene struggled to be a major player on the metal front, Nimrod B.C. has grabbed a second opportunity at impact since resurrecting in 2007. God of War and Chaos is the band’s second album and fairly indicative of an old school philosophy that’s unbridled in aggression and finesse while still balancing out aspects of melody and catchiness. Keeping the eyes on the prize so to speak in terms of tight arrangements, solid bursts of speed, and gang vocal choruses plus lead break bursts that elevate the adrenaline make these ten tracks easy to digest.

The speedier word spew and shrieking/low bellow tradeoffs from Gary Wayne certainly grab attention – some may handle the wild screams better than others, as you are taking in a twisted cocktail of Nuclear Assault and Exodus (Steve Souza especially) for “Frontal Assault” and “Revolution Evolution”. Musically Nimrod B.C. have a cleaner power riff propensity, although much of their energy comes from a Slayer mold, if only channeled through a Death Angel-like angle. Flanging effects open the stairstep guitar work on “Catastrophic Prophecies”, the riffing building and building while there are some killer harmony moments sprinkled about that hold your attention. An acoustic “Winds” instrumental gives the listener some classical relief from the electric proceedings, setting up the darker, doomier “They Shall Not Pass” that contains a little bit more of a battle march tempo and Gary’s snarling nature shines on this number. Seeking out Bill Metoyer on the mixing/mastering front improves the final sonic product, but there are times where this scribe would have preferred a bit more punch on the drum front – the snare feeling too digitized for a power/thrash record.

Nimrod B.C. will find their pocket of followers that want a hybrid thrash sound that has its roots truly in that mid/late 80’s power/thrash style. Curiosity abounds as to what a third album would sound like though – for God of War and Chaos achieves solid mechanics without really elevating itself above the crowd.