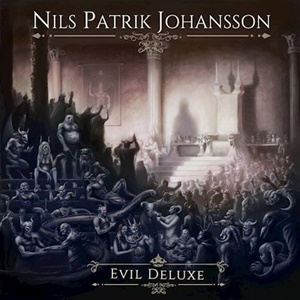 Unless you’ve been locked in a dungeon for a couple of decades, if you are familiar with power/ progressive metal worldwide, especially of the Scandinavian variety, you’ll know of vocalist Nils Patrik Johansson. He’s been a part of Richard Andersson’s Space Odyssey, Astral Doors, Civil War, Lion’s Share, and Wuthering Heights either past or present since 2002 – finally deciding to assemble a set of material under his own name, getting proper musical support from many friends and musicians to push his ideas into reality. Evil Deluxe as such won’t really surprise most listeners, as Nils knows how to deliver proper classic power/traditional metal fare with the emotion and versatility we’ve come to know and love – maintaining his quest for quality throughout his discography.

The record reflects Nils’ varied background and ability to stretch from straight-forward metal anthems that possess those riffs tailor made for 80’s synchronized stage moves as well as the man’s love for the genre as a whole. Check out “Kings and Queens” and “Metalhead”, which are sure to elicit jumping and devil horns aplenty, and then handle the seriousness of the shipping disaster of 1994 for the Swedes in the power epic “Estonia”. Keyboard inflections elevate the modern triumphant atmosphere aspect to other cuts, along with a punchier performance from drummer Fredrik Johansson (Nils’ son) – making “Gasoline” and “September Black” numbers that should go down for those wanting more of his Civil War songwriting proclivities. As a singer, you never have to worry about Nils hitting that right balance between conviction and emotion, rearing back for that melody and spirit of Ronnie James Dio careening headlong into that raspy nature of Blackie Lawless. Highlights on that front include his heavier take on the Accept classic “Burning” as well as the closing number “A Waltz in Paris” – the accordion and sultry swinging tempo elements promoting more of that French feel as Nils switches between restrained, semi-theatrical melodies and high-octane metal deliveries.

Lars Chriss of Lion’s Share handles the production chair brilliantly, and Chris Boltendahl of Grave Digger lends his guest vocal support as well – ensuring Evil Deluxe doesn’t disappoint on any front. Let’s hope for the global community this sprouts into a follow-up when time allows – as the man can sing and write classic metal that makes the legions stand up and shout. 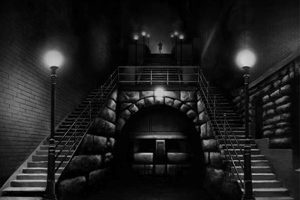