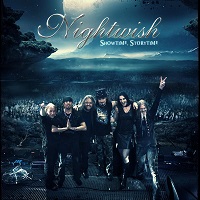 At this point, Nightwish would enjoy nothing more than some stability and normalcy. Come to think of if, when was the last time things were easy-breezy in their camp? Around 2002 for Century Child maybe? Those latter Tarja times were tough, and let’s not even head into the Anette Olzon era, where fan derision and iffy performances came to overshadow the two albums released during that time. The Showtime, Storytime DVD captures another perilous time period for the Finns, but it also showcases Nightwish Mach III, headed up by the marvelous Floor Jansen, who was recently introduced as the band’s third, and hopefully final lead singer. (Main dude Tuomas Holopainen would probably blow a gasket if he had to go through this again.)

Four discs in all here, two DVDs and two CDs, both which capture the band’s 2013 live set at Wacken. The live performance footage is ace – just like everything shot at Wacken. Multiple camera angles, loads of crowd shots (estimates suggest over 80,000 were in attendance), and zoom-ins of Jansen vamping (“She is My Sin” and “Bless the Child” are standouts), Holopainen pounding the keys, and Marco Hielta’s charming smile. Cool stuff, but the 40-minute “Please Learn the Setlist in 48 Hours” documentary takes it. Chronicling the entire tour process for 2011’s Imaginaerum, the documentary doesn’t include Olzon (who was left out at her own request), but it does show the desperate spot the band was in when she fell ill for some North American shows, along with the emergence of Jansen, who saved the day, not to mention the tour.

Everything that is rightfully associated with Nightwish: bombastic, over-loaded, yet perfectly executed, Showtime, Storytime thrusts the band into what should hopefully be an exciting, but stress-free time in their career. Think about it: Jansen is well-respected, the band is adored in Europe, and here in the States, they grow bigger with every tour. Nice to see it all captured in one spot.