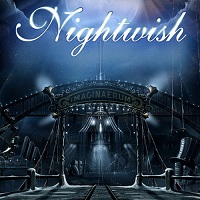 how Nightwish ends up writing longer, more complex songs when they should be doing the opposite…an elaborate concept album likeImaginaerum would be totally Tarja Turunen territory. Totally. Simple-minded Nightwish has never been, and in the process of solidifying singer

Annette Olzon, they’ve taken their brand of symphonic metal to new arenas. Internet detractors would cite this as a reason to cover up for Olzon (they’re idiots if they think that), but she’s a vital cog in the tapestry of Imaginaerum.

Conceptually, Imaginaerum tells the tale of a composer (probably mainman Tuomas Holopainen) on his deathbed recollecting his life. An accompanying movie should help drive the script

home, yet a lot of these songs can stand on their own two feet, particularly lead single “Storytime” which is blatantly infectious, in an ABBA sort of way. Olzon is perfect for this kind of song, as her peppy cadence is hard to deny in the chorus. It’s as sugary-sweet as anything the band has done.

The straight-metal punch of “Ghost Town” is easy to grapple with, buoyed by Marco Hietala’s vocals, while the Celtic-tinged “I Want My Tears Back” sees Olzon and Hietala team up in the chorus for some excellent harmony action, perhaps the best on the album. “Scaretale” holds up its bargain as being the album’s heaviest song

– a pulsating romp through the band’s well-tread symphonic metal terrain.

Because the album is set to a movie

, one has to look beyond the non-traditional tracks like “Slow, Love, Slow,” “Arabesque,” and the final strands of “Song of Myself.” These jams are simply transitions into the next portion of the story, thus enhancing the effect of “Turn Loose the Mermaids,” (the album’s sole ballad) the brooding “Rest Calm,” and poppy “The Crow, the Owl,” and the Dove,” another sterling duet between Olzon and Hietala. As immense as the album initially comes across, its ability to segue from one part to the next is one of its greatest strengths.

An album that grows with every passing listen, Imaginaerum probably won’t put to bed the Turunen versus Olzon debate, yet it further solidifies what an immaculate composer Holopainen is. Few minds in metal possess such a wide creative brushstroke, allowing him to take calculated risks like this. Considering the fervor Dark Passion Play created, it makes Imaginaerum all the more impressive.