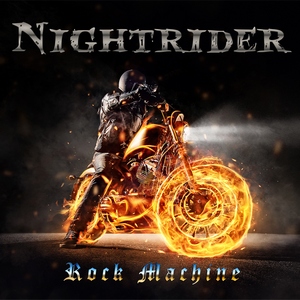 Hailing from Nashua, N.H., Nightrider was born in 1980 when four teenage friends got together to celebrate their love of hard rock and heavy metal. Beginning as a cover band but soon writing and performing originals, the band possessed all the requisite talent to make it big and tour alongside their influences, but that big break never quite came.

Despite flying under the radar, drummer Brent Enman, lead vocalist and guitarist Steve Labrecque, guitarist Ken Merrifield, and bassist Bert Plante forged ahead making the music they loved. Over the years, the band released a set of recordings on cassette and, with the help of a label in Greece, assembled a CD compilation of older material. Never ones to let that heavy metal flame burn out, the band has rerecorded a number of their earlier songs and written several new ones for its latest release, Rock Machine.

One listen to Nightrider and you’ll be instantly transported back to the golden era of heavy metal when such bands took over arenas and stadiums in the 1980s, while thrash was building in the underground and the New Wave of British Heavy Metal was taking over across the pond, a heavy influence on the band. Often when the ’80s and metal are mentioned in the same sentence, images of painted faces and teased hair come to mind, but this is not the case with Nightrider.

Played with a looseness akin to Motorhead, Nightrider’s music is rougher around the edges and contains more muscle than the Hollywood polish of bands frequenting the Sunset Strip. Much of the music is anchored by Plante’s galloping bass rhythms and Enman’s steady, yet pounding work behind the kit.

One of the things that truly makes Nightrider stand out from the pack is the four-part vocal harmonies, as each member contributes backing vocals. This is used to great effect on songs such as “Get Up or Get Out,” one of the catchiest on the album, and “Power of Passion.” Enman takes over lead vocals on “Hard Livin’”, a straight-ahead, hard-driving rocker.

Following in the footsteps of talented guitar tandems before them, such as Tipton/Downing, Murray/Smith or Gorham/Robertson, are Merrifield and Labrecque. NWOBHM-influenced “Knightmare,” a mid-paced rocker with a pounding rhythm, and “Hard Driving Metal Machine,” one of the newer songs, also bolstered by thudding bass, each showcase the skillful twin harmony lead work of Merrifield and Labrecque, not to mention the fiery fretwork at the end of “Vanishing Point,” one of the fastest songs on the album.

For the most part, Labrecque’s vocals sit in a rich, melodic mid-range, but he has the ability to ascend up the register (“Stranger In A Strange Land” – not an Iron Maiden cover), as well as delve into a grittier rasp, which he uses in spots during “Rockin’ Down The Night” and “Let Me Move Into You.” The latter is the closest thing to a power ballad on the album, and while it does slow down the tempo, it features some of Labrecque’s grittiest vocal work, making for a nice contrast against the slower, mellower melodies.

Speaking of slower tempos, the heaviness of “Not About You” sounds like it could have been written during the sessions for Heaven & Hell’s “The Devil You Know.” This one is also quite catchy and easy to sing along to, another hallmark of Nightrider’s music. It’s very accessible and full of energy, making you want to raise your glass, bang your head and sing along.

The album closes with “You Can’t See The Sun,” a bonus track of a 1990 recording previously unreleased. Featuring piano and even giving off some Jethro Tull vibes in parts, the song overall is quite different from the rest of the album and sounds like something that might appear on an Alice Cooper album. That being said, it’s a welcome addition that further illustrates the diversity of the band’s sound and playing ability.

It’s not often you have a band come along with roots firmly planted in the 1980s yet who can still fit quite comfortably in today’s modern music landscape, but that’s just what you get with Nightrider. Sure to be championed by the denim and leather crowd, Rock Machine is a tour de force of melodic hard rock from a band eager to prove they still have what it takes to go toe to toe with the competition, be it their influences or their contemporaries. 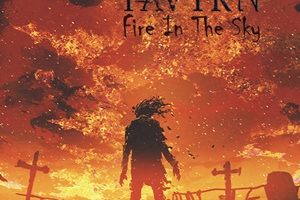 TAVYRN – Fire in the Sky (Self-Released)