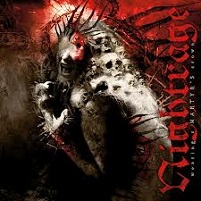 …it’s really simple to play melodic death metal of the Swedish variety accordingly. Of course, everyone (i.e. random metalcore band #562) says they do it right, but they’re not Nightrage and Nightrage is not At the Gates or classic In Flames. They just sound like ‘em – which is fantastic.

Laying claim to two of the decade’s best melodic death metal releases in the form of 2003’s Sweet Vengeance and 2005’s Descent Into Chaos, Nightrage have become to the ‘00’s what the aforementioned tandem and Dark Tranquillity were to melodic death metal in its heyday. Occasionally, they’ll stray outside the lines, as in the over-usage of clean vocals on 2007’s quite good A New Disease Is Born, but for the most part, this is textbook

melodic death metal, which is fantastic as well.

Marios Illopoulos has more than a few ample riffs at his disposal, just check out the darting lead run in “Abandon,” or the modern In Flames boogie of “A Grim Struggle.” Acoustic guitars pop up all over the place and they’re well-timed and memorable, just check out the hushed mid-section of “Wearing A Martyr’s Crown.”

Antony Hämäläinen is far more throaty than his predecesor, Jimmie Strimell and foregoes clean vocals for a very Lindberg-esque approach, which suits songs like “Collision of Fate” and “Futile Tears” admirably.

Still one of the top three bands

doing this style, Wearing A Martyr’s Crownmight not have the gusto of Sweet Vengeance or sugary-simple slant ofDescent Into Chaos, but it’s a cut above anything else posing as melodic death metal for 2009.