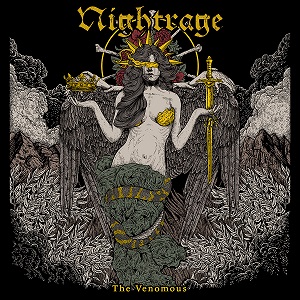 While not quite a melodic death metal institution, Nightrage are, for all intents and purposes, one of the last pure-breds of the style. Guided solely by guitarist/primary songwriter Marios Iliopoulos, Nightrage has the benefit of a few gems from the previous decade, most notably 2005’s superb Descent into Chaos, as well as the more recent The Puritan from 2015. Point being, Nightrage routinely delivers, regardless of who’s in the lineup. As you would imagine, The Venomous is top-notch.

Iliopoulos remains one of melodic death metal’s finest craftsmen, able to spin elongated melodies as well as brute, strident riffing. Nightrage still sound fresh because they don’t rely on the old Gothenburg playbook, but rather Iliopoulos’s own take on how to be harmonious and heavy at the same time. This is evident on the album’s opening title track, as well as “Catharsis,” which opens up with a lovely, spacious guitar intro, working its way into an up-tempo thrash-basher. Vocalist Ronnie Nyman is as convincing as any of Nightrage’s previous frontmen (and this includes At the Gates legend Tomas Lindberg), rolling out some desirable clean/screams on “The Blood,” as well as a heavy dose of potent harsh vocals on the restrained “Trail of Ghosts.”

While some have questioned Nightrage’s adherence to melodic death metal’s standards and principles, albums like The Venomous vindicate Iliopoulos’s unyielding vision. The Venomous, like previous Nightrage efforts, is a melodic tour-de-force, making the band 7-for-7 in terms of album output. Hard to mess with a track record like that.