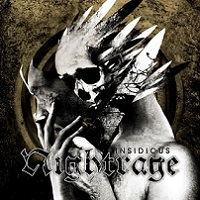 Perhaps the only band in the melodic death metal scene that could give Omnium Gatherum a real nudge, Nightrage continue their dominance over the style with their fifth album, Insidious. While it can be said there may be no band that plays melodic DM this close to the vest, there is little denying how enormously effective the bulk of these songs are. Nightrage literally sweats (and probably pisses) excellence. Sorry for being so graphic.

Lots of guests on this one, including original Nightrage vocalist(s) Tomas Lindberg (At the Gates, Disfear) and Tom Englund (Evergrey), the latter of which is charged with laying down some haunting clean vocals, as heard on “Sham Piety” and “Wrapped In Deceitful Dreams.” Getting in on the fun is Firewind singer Apollo Papathanasio, who provides the hush repreive to opener “Delirium of the Fallen” and “The World Is Coming To An End,” among others. All three are perfect complements to singer Anthony Hämäläinen, whose tried-and-true Gothen-bark (did you catch that?) is as vicious as they come.

Little to gripe about in the riff department here, as mainman Marios Iliopoulos has dipped even further into his arsenal, with the hard-lined “Hate Turns Black,” the frantic Gothenburg stomp of “Utmost End Of Pain” (which may be the best song here) and dark “Poignant Memories” leading the way. There’s such a strong grip on melody here that even though the bulk of the album has riffs of the melodic variety, they never get tiring or stale.

The type of band and album that can easily make those forget about the recent sound departures of the melodic Swedish death metal core, Nightrage have comfortably carved out a niche all their own. In the process, they’ve become one of the few “go-to” bands in melodic death metal. There’s just too many good ideas on Insidious for this to be ignored.