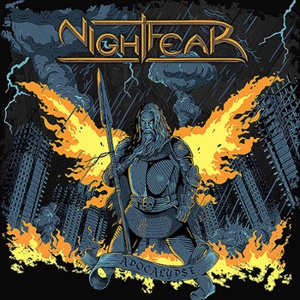 Based in Madrid, Spain, Nightfear is a heavy metal band that have been together since 2008 and released two previous albums with Inception in 2012 and Drums of War in 2015. Naturally going through a few lineup changes over the years, they are now ready to release the key third studio record with Apocalypse. We all know many veteran acts who shed their influence cocoon and make landmark releases at this point in their career – The Number of the Beast and Master of Puppets anyone? Anticipation remains high that this quintet could deliver their own version of a pinnacle/breakthrough effort here… let’s press play and find out, shall we?

The opening drum spotlight salvo from Osckar Bravo allows the guitar charge and high-octane vocal melodies for “We Are Back” to signal Nightfear revere the best in power and traditional metal, thinking of classic Judas Priest and Helloween as the double kick and heads down rhythms plus searing harmonies fly in and out of the arrangement. When the tempo slows down a pinch for “Living Your Life”, the subtle progressive twists and semi-staccato crunch comes alive, giving singer Lorenzo Mutiozabal a chance to flex his mid-range and upper register power in the tradition of Geoff Tate, Michael Kiske, and James Rivera. Traversing Primal Fear-like precision against some neoclassical guitar runs, “A Better World” is a front half highlight, the chorus full of that Teutonic-positive glory. While shorter songs carry the early part of Apocalypse, these musicians choose to stretch their instrumental chops and interplay on the back side, as “Through the Stars” and “Angels of Apocalypse” at 6:29 and 8:27 respectively give you plenty of extended guitar sections, filled to the brim with enticement a la Symphony X or Iron Maiden to raise the horns or your favorite beverage in admiration.

Intertwining the best American/European power and traditional metal aspects into their sound, Nightfear possess an energetic style that most followers will easily appreciate and consume. Considering this scribe’s first exposure to the band, it’s well worth the investment as this group is on par with their veteran peers in terms of songwriting, talent, musicianship, and overall professional presentation/execution. All guns blazing in this nuclear fire.