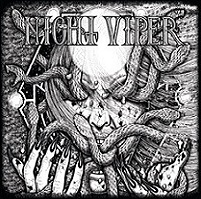 Once the year wraps up in a bit, it should belong to Night Demon, who in a very convincing fashion, have single-handedly revived pure American old-school metal. Given the lack of available good names, here comes Sweden’s Night Viper, who in a shot, aren’t terribly far off from the aforementioned California power trio. The product of vocalist Sofia Lee Johansson and Tom Sutton (he of Horisont and Church of Misery fame), Night Viper, as so predicated, are a vintage mish mash of classic metal, thrash, and hard(er) rock, all topped off with the rough, coarse vocals of Johansson. Just a year into their existence, this self-titled effort is also their debut.

Johansson, if anything, is more of a bit player than a primary contributor. She’s not necessarily a singer, but a shouter-in-key, if you will. Such limitations are noticeable during the up-tempo “Run for Cover,” which if suited with a more growl-oriented gent (or lady), might have more of an effect. Here, it just sounds like the band pulled up some random audience member for a toss-up of Metallica’s “Motorbreath” and any number of hard-driving NWOBHM song.

Still, the band is pretty lock-step across this nine-song outing. The fists-be-ready surge of “Curse of a Thousand Deaths” is pretty convincing; same bodes for “Never Be Enslaved,” which finds Johansson operating in a much more convincing fashion. And to top it all off, album highlight “Dagger in Hand” proves to be a rollicking blend of punk bopping and angular, street-ready British metal.

There’s no shortage of old-school action to be found in today’s metal scene, which doesn’t exactly make Night Viper a unique commodity. Johansson will easily net the band some quick, easy looks, yet the real cache here is within the songwriting abilities of Sutton, who clearly knows his way around a vintage tune or two. 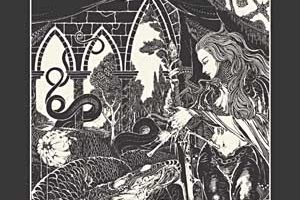