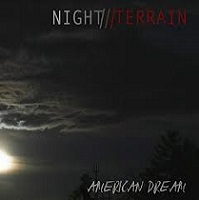 No matter the form it takes, post-metal is often times a tough sale and very polarizing in how it’s received. If for no other reason, this is because of the frankly staggering variations in quality that exist amongst those trying to make waves within the genre and it’s a fragile balance to keep. Too much aimless texture or atmosphere and the creations collapse under their own weight (Battlefields comes to mind), or a distinct lack of actual song writing focus to push along with all the atmospherics (Mouth of the Architect fits this to a tee). So it is with a bevy of ideas and a peculiar execution that Night Terrain throws their lot into this genre with American Dream, resulting in a mixed bag, not exactly falling prey to same ills of the aforementioned bands but nevertheless occasionally coming up short.

The most damning criticism that can really be leveled against American Dreamis something that plagues the genre as a whole: there aren’t enough quality ideas to justify the bloated hour-long running time. Across the album’s 10 tracks every song falls between five and-a-half and seven minutes, and this ‘sameyness’ bleeds over into the songs. Most flow at similar paces and employ similar ideas, but whereas it comes together in a fashion that marries form and function (opener “Dyssonic”), the same attributes are applied with less effective results in follow-up track “Beyond Walls.”

When the intercourse of all the constituent ideas the band strives for come together well like on “American Dream” the results are particularly stellar, its smooth transitions and solo integration working to an end most of the songs do not reach. Almost entirely instrumental aside from album closer “Distant Echoes,” which in itself, stands as a fantastic statement to what the band can do when they make appropriate use of variation in the implementation of their ideas – namely the tasteful use of vocals. Not to say in future releases they should slap vocals over every song, but in many cases here the vocals may have added a missing flavor to songs which don’t exactly function on an interesting enough level as pure instrumentals. This inconsistency is especially frustrating when considering how strong the back half of the album is with tracks “Wild Again” and “Adrift.”

On the surface Night Terrain, isn’t all that dissimilar from Russian Circles or Pelican (well, before the fall). It’s a band searching for its own niche within the sound however and growing pains are to be expected. There are enough grin-inducing moments sprinkled across American Dream to warrant keeping an eye on the band, for after putting these songs to pavement through touring and getting a comfortable feel for what works and what doesn’t the next album will be something astounding. Even trimming this release by 20 minutes would have made a tremendous difference in the impact it has, but such is the nature of the beast. To that end while the band may have missed the mark by a bit with this release they hold a great deal

of upward promise. The future is bright even if the present is a bit murky.