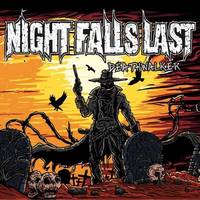 Independent Austrian groove/thrashers Night Falls Last drop an energetic full-length in the form of Deathwalker. After two EPs, it was time to bring it up to the big leagues and that the band did. While it’s nothing earth-shattering or innovative, it’s some groovy thrash done with plenty of enthusiasm.

If you don’t mind your thrash in a more modern sense, you’ll find plenty to enjoy on Deathwalker. Lamb of God almost instantly rings a bell once the initial stomping of “Fear the Machine” begins, and Night Falls Last does tend to enjoy the galloping pace that allows them to bring in some breakneck riffs. Unfortunately, there are a number of moments that feel a bit too close to Lamb of God. On the positive end though, instead of simply pulling a thrash-on-repeat format for the next 10 songs, the band does see fit to allow some variation into their game. “A Call for Inferno” has a more melodeath approach to it and sees the pace ease a bit, even going as far as adding in some clean vocals to break up the monotony that many bands of this ilk have a tendency to be known for. “Rise” is a 9-minute epic, that incorporates the aforementioned cleans alongside some standout lead work throughout. Its risks like these that will help to separate Night Falls Last from the rest of the pack going forward. The fact that the remaining two songs after “Rise” complete a short sentence of “And” “Fall” is a bit hokey, but it must be mentioned that “Fall” finishes the album on a rather abrasive note.

Bottom line here is that fans of groove-based thrash (not old school thrash) will probably take a liking to Night Falls Last. The small semblance of a Western-theme (check the artwork), along with some slight risks to the standard formula could take them a bit further, should they drop some rather prominent Lamb of God-isms.