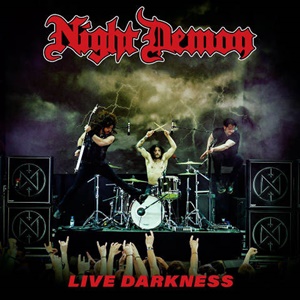 Arguably the hardest touring band in traditional metal, Night Demon live for putting on mesmerizing performances of both the small club and large festival variety. Building a faithful core of followers that enjoy sterling anthems that brandish the power and glory of NWOBHM, it’s not surprising that after an EP and two critically-acclaimed studio albums the time is now to capture a double live album of their best material. Recording in front of a packed audience in Cleveland, Ohio – Live Darkness contains 23 tracks and over 92 minutes of triumphant hooks, catchy melodies, and bountiful treasures in terms of songwriting that all come from a trio of musicians who always put 100 % into their passion for the movement.

What’s been remarkable regarding Night Demon is their attentive nature to all aspects of their performance. The tightness of the material is a given, but not wasting a moment to suck the audience in with their favorite guitar riff, supportive bass line, steady drum parade, and equally intoxicating vocal harmony parts that make you think of a time when Iron Maiden, Saxon, Raven, and their brethren led the metal charge. The gallops of “Full Speed Ahead”, the double kick, off to march/call to arms musical notations throughout “Dawn Rider”, the basic melodic hard rock swing for “On the Run”, to the haunting, atmospheric Wild West-style ballad “Darkness Remains” – proving that versatility wins in convincing fashion if you stick to your guns and expect quality to the highest degree as you sweat out these parts for months in vans, hotel rooms, or rehearsal spaces. Vocalist/bassist Jarvis Leatherby, guitarist Armand John Anthony, and drummer Dusty Squires play as a ball of fury, steamrolling the legions with sing-a-long anthems at speed metal pace for “Ritual” as easy as they turn around and deliver something a la “The Zoo” from The Scorpions for “Curse of the Damned” – the audience chanting in all the right places for added energetic support.

Favorites would be so hard to name as they change given the next pass – for this scribe’s money, there’s nothing quite like the name dropping of the entire Iron Maiden catalog during “Maiden Hell”, the slow to faster gear shift nature for “Stranger in the Room”, and of course the closing electricity generated from “Night Demon”. Seven years into their career, Night Demon continually accelerate a love of heavy metal unlike many others for the ‘new’ brigade – and it’s easy to see why they are not only attracting tens of thousands to their activities from an audience end, but gaining steam on a larger scale with touring opportunities for Carcass, Crowbar and Accept. Horns up, beers high – looking forward to seeing what these gentlemen cook up on their third studio record soon.