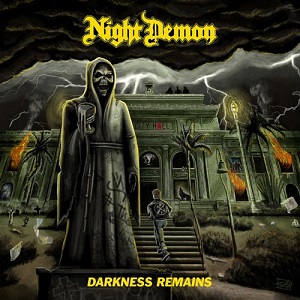 When it comes to heavy metal, all of us remember gateway artists who made us lifetime members into the fold. Usually this occurs in our adolescent or high school journey where we seek out comfort and solace through a musical soundtrack that speaks to our changing outlook and confusion about the world around us. For many, all roads lead to Black Sabbath… and if you were a child of the 1980’s, chances are many forged their path into the New Wave of British Heavy Metal and the biggest success from that scene, Iron Maiden. Those who long for that torch bearing future act who will keep the roots of traditional metal alive once Maiden and company retire need look no further than the impressive discography already established by Night Demon.

Pushing a relentless 200 plus date road schedule for two years to support their debut album Curse of the Damned, the stakes are quite high that this follow up Darkness Remains will establish the trio as solid, trustworthy heirs to the throne. Seamlessly adding guitarist Armand John Anthony for Brent Woodward, the Night Demon train keeps rolling along, benefiting from a vibrant production standpoint to properly replicate the powerhouse live energy delivered on these ten songs. Subscribing to an all killer, no filler philosophy, the intro to opener “Welcome to the Night” features clean and twin electric guitars plus a simple keyboard refrain a la Judas Priest’s “The Hellion” before the galvanized riff charge and vocal melodies take control of your soul. Elsewhere the band establish broader horizons, including a willingness to incorporate more of the spider web licks and tempo changes that originally put Maiden on the map – check out the snare cannons from Dusty Squires as well as the lead break out of Armand towards the second half of “Stranger in the Room” or the 4:08 instrumental “Flight of the Manticore”. The closing title cut is an atmospheric semi-ballad, introspective with bassist/vocalist Jarvis Leatherby using distant microphone effects as the song builds in almost 70’s classic rock meets spaghetti western atmosphere, thrown through a metal veneer.

Highlights change daily as this receives incessant playbacks – those who love Maiden’s entire catalog will enjoy the namedropping throughout “Maiden Hell”, although be pleasantly surprised that musically it’s more of a speed early Metallica-oriented affair, while the double bass hits, pumping bass, and mid-tempo marching groove hooks for “Dawn Rider” elevate fists and command active audience participation. The band has taken an active look at what metal songwriting needs today from the past as far as focused hooks, harmonies, and melodies – and brought it back with a vengeance. Understanding that the genre demands a kick in the ass, Darkness Remains hopefully will rest the case that Night Demon are a premiere creative purveyor and requisite band to count on for today, tomorrow, and decades to come.