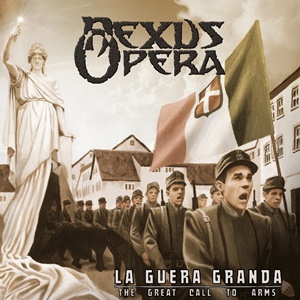 Named as a ‘connection opera’ between the present (the band’s music) and the past (history, characters, and real events), Italian act Nexus Opera originally started in the early 2000’s, split in 2004 only to reform in 2012. They released their debut album Tales from WWII in the fall of 2014, and now we have the follow-up for La Guera Granda (The Great Call to Arms). Another concept record, the sextet tackles the protagonists and events of the Austro-Italian front during the Great War – starting in 1915 and ending in victory for the Italians on November 4th, 1918. But do not think that these musicians aim for the Sabaton power metal formula – these tracks have a bit more of a traditional power slant with symphonic and epic textures, especially in terms of the classical tinges and choir accents.

Considering the two guitarists and keyboard musicianship presence, Nexus Opera allow for a broader sonic output and expand horizons through some great melodic/neoclassical interplay throughout these songs. Occasionally keyboardist Gianfrancesco Araneo can take the lead through a prominent main hook as “Raid Over Vienna” illustrates in the opening bars, while guitarists Marco Giordanella and Alessandro Pinna weave some power magic through their power runs and exhilarating lead breaks for “Trenches” – the latter featuring some potent, male and female choir support for key shouting/background vocal parts. Additional old-school instrumentation gives “The Mine” more of that throwback early 20th century atmosphere – a mid-tempo outing featuring a theatrical-like main hook and piano/guitar work plus progressive drumming that proves these musicians love to fuse classical techniques in a power/heavy metal framework. The group overall have a lot of qualities that blend together classic Stratovarius with the Teutonic/Italian scene – the main struggle though for a full recommendation lies in the sub-par melodies and range of vocalist Davide Aricò. He lacks proper control and full English pronunciation in the mid-range to upper reaches, failing to hit the highest notes convincingly in sections of “If Even the Sky Burns” and “Great Call to Arms” – despite stellar choirs surrounding him. If he could gain more coaching/ seasoning this could be rectified, so all is not lost.

The solid musicianship and conceptual theme plus extra choir/narrative accents could sway many into the Nexus Opera camp more than most – you just wish the main vocal parts were a little stronger to keep interest higher. Possibly a band to keep on the backburner and see where things progress with the next record.