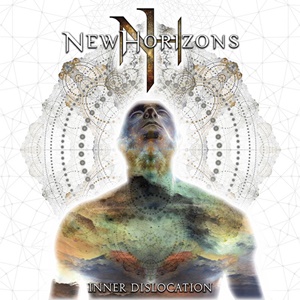 A fervent tape trader during 1988-1995, opportunities arose for this scribe to take in the Italian power/progressive metal groundswell as acts like Eldritch, Labyrinth, and Rhapsody pushed the scene to brighter beacons than previously available. New Horizons are a newer sextet, starting in 2013 and slowly assembling the right musicians to release their debut demo The Trail of Shadows in 2014. Inner Dislocation represents the full-length debut, several years in the making between recording, mixing and mastering – and gives the listeners a broad spectrum of progressive metal that spans the gamut from melodic hooks and atmospheric passages to stunning, propulsive intricacies.

The diversity New Horizons embraces aids the cause for the possibility to separate themselves from the pack – never afraid to add the occasional heavier/doomier part that transitions into a spacious arrangement for “Inhuman Wrath” that can be down-tuned a la Nevermore and gritty between the guitar/keyboard tones (including some organ passages) while evoking Threshold elements in the mid-range vocal melodies. Bombastic/cyber-oriented spots set up the shorter title track, a signal of what’s to come as keyboardist Luca Guidi and lead guitarist Giacomo Jack Froli ably push and pull back for the instrumental chemistry blossoms. You don’t even get to hear the voice of Oscar Nini until the 1:07 mark of track three “Where Is the End” that features a nifty drum shuffle during the verses courtesy of Federico Viviani – but Oscar’s passionate and lower/mid-register mysteriousness serves as a cohesive glue to compliment the serious progressive interplay that flows part to part during the longer instrumental section. Unafraid to incorporate shimmering classical piano, pomp 70’s style keyboards, and unison guitar/keyboard/bass parts, it’s easy to make comparisons to Symphony X, Circus Maximus, and a bit of that Kansas/Styx intuitiveness during masterful compositions like “Evolution” and the shape-shifting 9:16 closer “The Trail of Shadows”.

Inner Dislocation touches upon all the right elements in the evolution of progressive metal since Dream Theater made mainstream impact with Images and Words – straddling the balance between sophisticated, intricately enticing musicianship and stellar hooks on the vocal front to gain wider audience potential. One to watch for certain.