Neurotech – Infra Versus Ultra (Self Released) 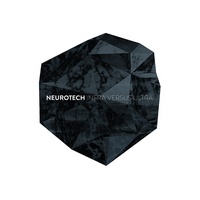 Another tail-end of the year discovery through Bandcamp, Neurotech plays the type of metal that may not be for everyone. Electronic/industrial metal seems to be a dividing line for many, and the percentage of the electronic and cyber influences usually play a big part in where that line is drawn. For Neurotech, it might even be the line that they drew with previous album, Antagonist. If that is your starting point with the band, there are some distinct differences with Infra Versus Ultra.

Neurtech is the one-man project of Wulf, who very clearly has a knack for putting together driving cybermetal with soothing atmospheres. The notable difference from Antagonist is the lack of growled vocals, with Wulf relying solely on vocoded clean vocals. Before you already decide to abandon ship, know that the processed vocals are not what you might assume, and match the sound of the band quite well. They have an almost ethereal, transcendental quality to them and it may surprise you how good they are. As for the music itself, there are some nods to bands like Deathstars, Pain, and even Fear Factory. But on the more gentle end of the spectrum, there’s even a bit of Depeche Mode that comes through (see “Transcendental” in particular). When the guitars sync up with the electronic pulsations the way that they do on “Atlas,” “Unleashing the Dead,” and “When the Night Falls,” it’s hard not to stand up and applaud. Other tracks, such as “The Longest Time” and “Sacrifice” opt for a more mellow attack, relying more on ambience and atmosphere than guitarwork but it’s a sound formula and gives the album some clear variety and truth be told, both of the approaches are equally mesmerizing.

While it may not be built for “everybody,” there’s no denying that Neurotech is on to something with Infra Versus Ultra. It’s adventurous and the type of album that takes you on a journey. Nothing short of impressive here, and like most notable Bandcamp releases, can be found for the equitable “name your price” download so there should be no barrier towards checking this one out.