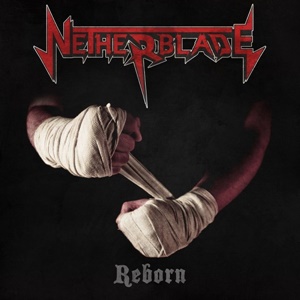 Pointy logos often exude a certain brand and ethos when it comes to metal. Italian quintet Netherblade since 2016 have been slicing and dicing their thrash brand through the underground – releasing two singles and an EP prior to this debut full-length in Reborn. It’s obvious after a few spins that the band possess a strong affinity for Bay Area thrash, but also inject a bit of power groove and progressive interplay at times to distinguish themselves a bit from the retro pack.

The guitar action has a little sophistication and flair around the normal heads down rhythm section charge – elements from Artillery to Death Angel come to mind when taking in the riffs and transitions for “Eyes of the World” and the quick hitting “Netherblade”. At other spots, the next generation of acts like Machine Head and Battlecross come up in a song like “Reborn”, especially the mid-section breakdown where drummer Danilo Sunna hits a brilliant triplet stride before transitioning back into a slamming double kick/groove foundation. Although most of the songs keep a tight focus in the 3 ½ to five-minute range, “Killing Spree” at 6:41 takes advantage of a calmer clean guitar/tribal drum-like introduction before moving into a southern-like C.O.C. / progressive riff twist, the sneer vocals of Andrea Ledda working better in certain verses than others. When the rapid-fire word delivery kicks in, it’s a little too forced and makes matter cluttered against the very engaging musical foundation that features a mini-bass spotlight from Fabio Vanotti as well as a spirited, bluesy lead break. The record ends on another crushing track “Nothing Is Real”, the back and forth guitar sequences as well as pummeling drum activities sure to cause pit-pounding when aired live.

The possible deterrent to full enjoyment of Netherblade could be in the semi-hoarse vocal presence Andrea employs at certain times on the record – he’s better off just keeping things more in the mid-range pocket, not going too left of center with an out of place manic scream ( evident in “From the Abyss”) as it could cause certain thrash mavens to cover their ears and move onto another band quickly. Overall the musical component will win others over, as you really hear a band that can combine thrash with a modern groove and place progressive parts in as seamlessly as this band has here with Reborn.