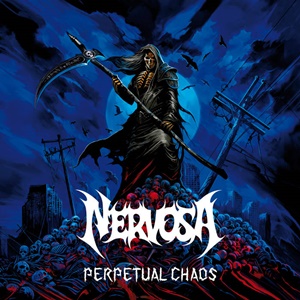 Recalibrating a lineup after establishing themselves through three solid thrash releases, Nervosa has every right to feel nervousness about how the new members and fresh sound will be accepted. Guitarist Prika Amaral assembled an international resurrection of a lineup – expanding from a trio to a four-piece with vocalist Diva Satanica from Spain, bassist Mia Wallace from Italy, and drummer Eleni Nota of Greece. The results can be heard on Perpetual Chaos – a thirteen song platter that keeps the band still in their thrash cosmos, only adding a deadlier angle from extreme death/black influences which the new members bring to the table.

When wanting to pummel the listener on a blasting to melodic thrash see-saw aspect, look no further than “People of the Abyss” where Eleni slams her kit with reckless abandon against Prika’s frantic chord progressions. Keeping the song structures tighter and shorter (the longest cut “Under Ruins” at 3:57) while executing material at dynamic paces allows the listener to submit to the arrangements be it mid-paced and semi-tribal for the title track or evil “Kings of Domination” or vicious and primal with the Destruction-like “Genocidal Command” and powerful, semi-melodic “Rebel Soul” that features a guest vocal from Eric AK of Flotsam & Jetsam to work in tandem with Diva’s raspy roar. Nervosa have an inner confidence that presents in some of their most impressive songs and performances to date – knowing when to add the right groove accents, solid riffing and lead break skills with Prika, and Diva’s natural abilities as a singer to be discernible in her blackened thrash mannerisms to keep all parties riveted from first note to last. It’s as if the band took their previous work, turned on a bit more of that underground extreme fascination, and come out stronger and heavier/aggressive without losing any sense of hooks or catchiness as appropriate.

The continuity of co-producer Martin Furia (who worked on the previous Downfall of Mankind) assures Nervosa in 2021 is not veering far off their established course. Perpetual Chaos delivers in that indomitable spirit of what thrash should be about – unyielding, tough as nails, and could gain the band even more extreme followers to the mix.