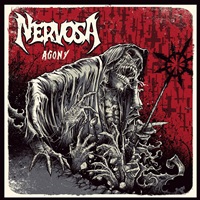 Remember when Brazilian thrash took the world by storm with the release of Sepultura’s Beneath the Remains in 1989? The record caught fire due to speedy riffing with melodic nuances on a musical level, thrown over the top by Max Calavera’s potent roar and easy on the brain refrains/choruses ringing through the airwaves. What does this have to do with Sao Paulo trio Nervosa you ask? Well, strong inclinations of that similar take no prisoners, memorable thrash vibe are ever-present on this second studio album Agony.

Recording the album on the fly while touring the United States (The Foundation in Oregon for drums, Norcal Studios in California for everything else), an edge of brutality rings through much of the riffing, screams, growls, and rhythm section work. Bassist Fernanda Lira’s dual high pitched screams and occasional low end growls make her cross over thrash/death lines while still being clear in her enunciation – taking “Deception” to that Slayer meets early Sodom/Destruction rawness that put them on the map. Occasional blast beats can give way to mid-tempo groove and then uppity thrash, all within the same song (or often changing that quick measure to measure) – proving Pitchu Ferraz’s kit expertise as she whirls about the kit like a demon on “Guerra Santa”. The guitar work holds down a lot of the melodic thrills, quick hitting note bends and evil trills approaching roller coaster speed drops while the leads contain energetic adrenaline rushes – Prika Amaral giving “Failed System” and the stacked gallop monster “Devastation” two of many thrash treasures for the hordes to careen, crash, and receive neck whiplash for maximum appreciation.

The final track “Wayfarer” contains dynamic contrast – opening in more of a controlled, blues/metal foundation with supreme, clean vocal confidence, the 6:29 arrangement has a lot of “Children of the Grave” buildup moments before transforming into a fierce Nervosa effort. It’s probably a great launching pad for the trio into the future, as Fernanda often draws out one word at a time (in time) with the music at hand for added heaviness and emotional impact. Beyond the black and white skull-corpse creature and red lit upside down crosses that bring Agony to life visually for the cover, Nervosa truly deserve accolades for their relentless worldwide tour schedule to gain traction in a highly competitive marketplace.

Agony will be talked about as one of the thrash records for 2016.