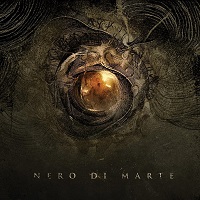 To date, almost all of my interactions with the Italian metal scene have come through two groups, Lacuna Coil and The Secret. One being a gothy-alterna act everyone should be familiar with and the other an impossible-to-search-for group that exists in a form kinda similar to Converge – very dissonant, hyper-kinetic, and frantic. I can now add another group that list with Nero di Marte and their fantastic (…if thick) self-titled debut. Progressive (ish) death metal with lengthy and intricate compositions that bounce between the riff-happy and the frantic. A surprisingly fantastic listen so early in the year.

Sonically the closest comparison likely comes in the form of Gojira, but even then the similarities are tenuous and surface level at best: a rhythmic focus that drives the core of each track and the penchant for ongoing streams of riffing. Add to that a very dissonant tone at times and a love for tribal percussion, as found in opener “Convergence” or the atmosphere-heavy midsection of the monstrous 12 minute title track. Everything is ornate, precise, and heavy as a collapsing star.

It can take several listens to really sink in as at any given time there is a lot going on, but this is a beast that rewards return visits. Vocals are rarely the centerpiece, whether in semi-clean mode or a kind of harsh bark that, fit well with the surroundings, even when given to whispers. “Drawn Black”, with its comparatively condensed run-time of six minutes and effective showcasing of all the albums highlights, is a great place for anyone curious to dive in. A complex and fantastic experience all around and a legitimate surprise on my end.