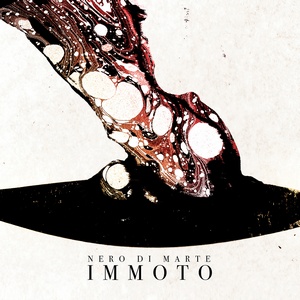 It’s been a long six years since the Italian monstrosity known as Nero di Marte wreaked havoc across my 2014 with Derivae. A lot has happened in that time for yours truly and no doubt for the band as well. Any fears of rust are quickly laid to rest, however, upon pressing play and allowing Immoto to fully open. The enormous, slower-but-burlier cousin to Ulcerate has lost none of its potency in the intervening years and subsequently we are left with a staggering, exhausting listening experience.

So what does that mean for someone that isn’t familiar with Derivae or the band in general? Nero di Marte occupy a rare space in the progressive death metal field, informed at times by post– dynamics. Dense guitar and monstrous-sounding drums overlap and interlock frequently over long durations. The songs frequently go beyond the ten-minute mark and the closer “La Fuga” here is somewhat anomalous in that it barely touches four and a half. Clean vocals, which made their appearance with Derivae, are used more often and to better effect here. “L’arca” is a roiling sea in a storm, wave after wave of new force being thrust against the listener to disorienting and suffocating effect.

Spiritually there is a lot shared between Immoto and Neurosis’ 1996 magnum opus Through Silver And Blood – sometimes the songs build to cathartic ends, sometimes they build to go nowhere at all. 67 minutes in seven songs is no easy stretch: this is not an easy listen. Quiet moments abound between the cacophonic peaks, as the beginnings of title track “Immoto” or penultimate “Irradia” do allow for some respite, no matter how minor. Much like the eye of a given storm, though, the quiet passes and the winds of destruction bear down anew. Immoto is that force.

Given the craft and complexity here it is no surprise it took six years to arrive. Though Nero di Marte occupies an already small sub-component of an already niche genre, they’re going in directions no else does. Immoto will not be not be kind to you but you will enjoy it.