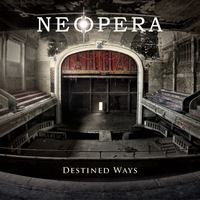 Probably one of the last 2014 releases we’ll be tackling in the first quarter of 2015 (and beyond), Germany’s Neopera is as suggested in the name, an operatic metal project featuring members of Dark Age and Gamma Ray. And since this is opera where most things are dramatic, it’s fitting that the recordings of Destined Ways were nearly lost when Hammer Studios (where the album was recorded, which is also owned by members of Gamma Ray) burned down in the fall of 2013. Luckily, the tapes were rescued, to the pleasure of all parties involved. (Could you imagine having to re-cut an album? Yikes.)

Anyway, lots of blending going on between the classical and metallic realms (duh), things that most of us have grown accustomed to based upon how epic power metal has become over the years. Neopera never quite ventures down full-on power metal paths, yet the music is muscular and keyboard-dominated, all set up to allow vocalists Nina Jiers and Thorsten Schuck do their operatic thing. The occasional use of gruff, metal-focused vocals could probably be done away with, as Jiers and Schuck pad their vocals much in the same manner Therion perfected in their prime, with cuts of note being “A Call to Arms” and “Remote,” which is the album’s standout cuts.

Founded and guided by Dark Age’s Joern Schubert, with helpful contributions on bass and on the engineering side from Gamma Ray’s Dirk Schlaechter, Neopera and Destined Ways have more of a feel as a real, bonafide outfit than some slapped-together side project. And with plenty of cohesion and sonic valleys to choose from (see: “Last Pantomine,” “Song of Revenge” et al), Neopera emerges as one of Germany’s finer entries into the operatic metal realm.