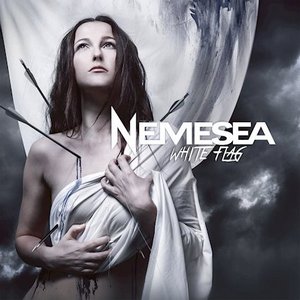 After vocalist Manda Ophuis left the band after the release of the band’s fourth album, Uprise, things could have easily fallen into a slippery slope. Ophuis had been with the band for 14 years, and to find another vocalist to replace such a tenured one is problematic for any band. But Nemesea grabbed Sanne Mieloo not too shortly after to positive accolades from fans. Mieloo proves she was the right pick for the job based on the fantastic end product in White Flag.

With the band shifting more towards a hard rock sound than their symphonic metal beginnings, nothing has really changed with White Flag. The progression from Uprise continues. Some metallic crunch remains, but its countered by a number of more melodic/ballad-y tracks and a punchy, modern rock feel (along with an occasional dabbling into gothic and electronic-enhanced waters). But where Uprise felt a bit more ‘ordinary,’ White Flag sounds like a band that has found their footing and are totally confident in their current direction. Meaning that they take a few more risks and allow for more dynamic change-ups. Perhaps some of this due to Mieloo’s vocal performance, but the band easily sways from a triumphant rocker like the title track to a more restful number like “Sarah” to the bouncy electronics of “Don’t Tell Me Your Name” with little hesitation or dip in quality. Punchy and upbeat cuts like “Fool’s Gold” and “Nothing Like Me” rank as some of the band’s strongest in this category, and the swirling electronics that infiltrate “Rise” and “Ratata” give the songs a richer tone without overtaking the crunchy guitar riffs. Mieloo herself proves fully capable of some poignant moments when the opportunity arises, and “Lions” and “Let This Be All” have some genuinely touching emotion to them.

White Flag sees Nemesea rising above their earlier efforts and delivering an emotionally potent piece of hard rock/metal. It continues in their sonic shift that has been present for a bit now, while really capturing an energetic and entertaining vibe.