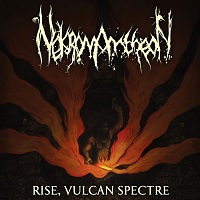 We all listened to a little too much Hell Awaits and Schizophrenia in our time. (Note: If you don’t know the respective bands

that recorded these albums, then shame on you) As the precursor albums to Reign In Blood andBeneath the Remains, both displayed two very raw acts who were obviously quite sure of their capabilities, and were well on their way to very big things. In turn, many have tried to harness the energy from Hell Awaits and Schizophreniaand pass it off as their own, something Norway’s Nekromantheon does very well on its Rise Vulcan Spectre album.

Accordingly, the band only knows one tempo, which is full-speed. Rampant Lombardo beats and copied tom sounds emanate as gnarled tremolo picking occasionally gives way to a quick groove portion. Alas, those moments are fleeting, for the pedal-to-the-floor thrust of “Cast Down to the Void,” “Coven of the Minotaur” and “Twelve Depths of Hades” are the absolute embodiment of the retrograde stance of the retro thrash movement. There’s not an idea here that wasn’t tossed around past 1987.

As a backdoor entry into the retro thrash sweepstakes, Nekromantheon does have the chops to keep up with the likes of Warbringer, Havok, and Merciless Death, although that’s not saying much. Really, the ultimate takeaway fromRise, Vulcan Spectre is that the thrash/death angle originally unearthed by way of songs

like “Kill Again,” “At Dawn They Sleep,” and “From the Past Comes the Storms” is virtually unfuckablewith. Simply by re-writing these songs doesn’t do them justice.