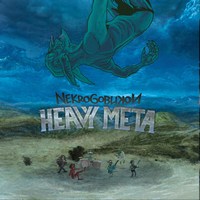 With two full-lengths (most recently 2011’s Stench) and one EP (Power) under their belts, Nekrogoblikon continue their quest to spread their self-proclaimed goblin metal with Heavy Meta. Apparently taking some of the criticism of their previous material in tow (of the band being more of a joke than being serious), Heavy Meta has a consistency to it that was lacking in older efforts. But is it for the better?

One clear difference in direction that the band has taken since their Power EP is that they’ve lost a lot of the “cheese,” particularly in the vocal department. Heavy Meta is a much more consistent effort across the board, but strangely this causes it to lose a bit of its charm. The lyrical content is just as silly as past efforts (as evidenced by “Snax and Violence,” “Full Body Xplosion,” and “We Need a Gimmick”), but comes across as a bit more serious in the way the music flows and the vocals have been recorded. In some ways, it is nice to see some progression, but Power seemed to embrace the hokey nature of the content and seemed a great platform for it. Much of Heavy Meta has a combo of death, folk, groove, and traditional metal influences and pushes the riffing in an uptempo and “fun” direction, but if one ignores the lyrics, it doesn’t seem to deviate too far from the more ‘serious’ bands.

Perhaps the band grew tired of looking gimmicky and wanted to show off some chops in the musical department, as Heavy Meta does represent them as being able to stand on the same ground as their more METAL peers. But as mentioned, there’s something that seems a bit lost on a number of these tracks (the closing title track is a good exception from this) as they push in a more somber direction. Obviously the band is never going to be completely serious, and it seems strange to say but it would be nice to see a bit more kitsch from time to time. 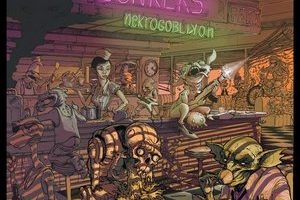