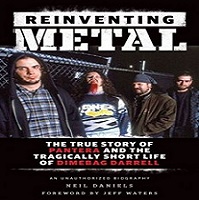 Get ready for an influx of Pantera-related books. It was bound to happen; you have those sugary glam years, Anselmo joining the fold, Cowboys From Hell, worldwide domination, Dimebag’s death, so on and so forth. And not counting Rex Brown’s recent (and spotty) autobiography, no one has taken a full stab at telling their story until U.K.-based author Neil Daniels decided to give it a shot. Pantera: Reinventing Metal: The True Story of Pantera and Tragically Short Life of Dimebag Darrell might not have first-hand accounts from the actual band, but one can easily walk away learning quite a bit.

Daniels delves into those aforementioned glam days, when Pantera was essentially forced to look (and play) like big-timers Ratt, Poison, and Whitesnake. Adding to the story are testimonials from the roadies that were with the band during this period, with one telling a rather questionable tale of how James Hetfield really wrote the main riff to “Cowboys from Hell,” and not Dimebag. (Can anyone verify this?) The meat and subsequent most interesting parts are when Anselmo uproots from New Orleans, gives the band a metallic edge, and the makeup and hairspray were cast to the side. Wisely, plenty of credit is given to the polarizing singer for this, too.

Once through the band’s rise via Vulgar Display of Power and Far Beyond Driven, stories of their gradual falling apart are detailed, with Anselmo becoming aloof, the Abbots growing frustrated, and Brown caught in the middle. Daniels does quite the excellent job of portraying this schism, which as we all know, is unsettled to this day. From the band’s management, former roadies, tourmates, and more, Reinventing Metal accurately paints a full Pantera picture, one that will no doubt be told over and over in the coming years. For the first book out of the gate, this is quality reading.