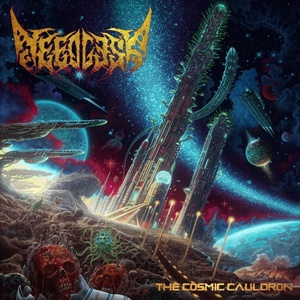 Parallels exist between the vast universe available to express a variety of thoughts and emotions in the realms of heavy metal and science fiction. Choosing to blend the two together in a conceptual album, Hungarian act Needless releases their second record in The Cosmic Cauldron – encompassing the story of an astronaut granting an unbearable gift from an entity, the relic from another world being ‘the cosmic cauldron’. Throughout these ten tracks and almost hour-long odyssey, the listener will hear a melodic death/thrash montage containing intricacies rarely heard – swift transitions, savage roars/screams, plus accents of an exotic and modern versatility. Evolving as a home project from 2004 into a five-piece juggernaut, the proof of professionalism hits the senses immediately – and doesn’t relent until the final note strikes.

The guitar work can shift from melodic death to modern/blackened principals from one riff to the next – check out the vicious down picking and furious blast beats during “The Predation” where supplementary funeral-like background vocals heighten the emotional purge, swelling to this quieter conclusion over the course of it’s seven-minute plus timeframe. Doom-like pacing and crushing triplet runs penetrate “Mournful Heavens”, vocalist Adám Foczek switching his delivery between shrieking screams and lower death growls that cross qualities of Lamb of God, The Faceless, and Scar Symmetry. While the adventurous story unfolds, the group equally place calmer earworms from time to time (the opening of “The Prism Fortress” a great example) before assaulting the senses again with progressive melodic death/thrash mechanics, drummer Kasper Botond putting on clinical warfare through his tempo switch-ups and incredible dexterity between snare, toms, and kick work. Those who love an abundance of guitar melodies and shredding lead breaks will be in their aural wheelhouse here – it’s evident that these gentlemen have studied at the altars of Children of Bodom, Dark Tranquillity, and others in that Scandinavian breed – as well as adding in some current favorites like Vektor to the mix.

By the time the ten-minute twister “Transgalactic” careens through your brain (complete with some narrative/chilling parts and a classically driven piano ending), most will succumb to the belief that Needless know their craft, excel at pushing the boundaries of the genre, and yet create plenty of retainable passages and songs. The world can use more progressive melodic death in a science fiction driven context, as The Cosmic Cauldron will enrapture global legions desiring strong musicianship in a heavy, aggressive package.