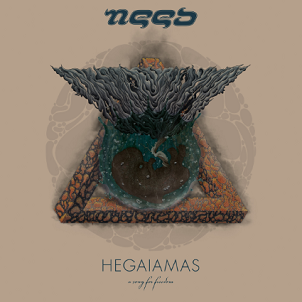 Need will be supporting Evergrey on their upcoming spring North American headline run, a golden opportunity for an unsigned Greek progressive unit. Surely the thought of the band re-mortgaging houses, borrowing money, taking part in medical experiments, etc. to make it over here is not far-fetched, but you have to hand it to them––their ambition is obvious on all fronts. (For the record, the band also played the 2014 installment of ProgPower held in Atlanta, GA.)

Hegaiamas: A Song for Freedom is their fourth full-length, a certifiable concept album that we’re trying to figure out, for no such corresponding information was found in their press materials. Never the matter, for the vocals of Jon V. (real name: Giannis Vogiantzis) is the necessary bridge to the progressive metal scene. Mr. V. is the bastard child of Fates Warning’s Ray Alder and the abovementioned Evergrey’s Tom Englund, two men with rather identifiable pipes. V. is more Alder than Englund, though, and on cuts like “Alltribe,” “Riverthane,” and the 21-minute-plus “Hegaiamas,” he’s every bit as brooding as Alder is in his current state.

Need falls into the dark progressive metal bucket, relying on sometimes simple, but driving riffs as heard on album highlight “Therianthrope,” which features a pretty cool guitar/keyboard duel. However, there’s the expected degree of stiffness found across a good portion of these cuts, whether it is because Need is so closely aligned with Evergrey and Fates Warning, or simply because conceptual progressive metal is such a tricky proposition. (Beware some quirky voiceovers that are piped in toward the album’s latter moments, too.) Need doesn’t come close to matching up to their progressive heroes on Hegaiamas: A Song for Freedom; perhaps live audiences in North America will be more understanding.