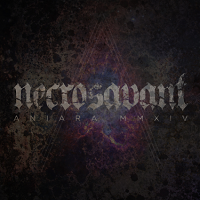 Arguably one of the more extreme outfits to hit the pavement on the always-reliable Kolony Records, Necrosavant is the one-man project of Jonas Martinsson, who has assumed the “Necrosavant” name as his alter-ego. Aniara MMXIV is the man’s debut effort and he gets some help along the way: Tobias Netzell (In Mourning, Majalis, Thenighttimeproject, Ex-October Tide), Alexander Högbom (October Tide, Centinex, Moondark, Volturyon, Spasmodic), and Daniel Jansson (Ikhon, Majalis) all chipped in on what is an otherwise blistering display of blackened death metal.

Inspired by Harry Martinson’s space poem “Aniara: A Review of Man in Time and Space” from 1956, Aniara MMXIV, according to Martinsson, is to follow-up on Martinson’s writings about human existence, and, how “destiny is in our own hands.” Certainly not the most common of topics to be found on a metal album of this nature, Martinsson did an entire song in one go, which could either make or break the album, depending on one’s preference. However, there’s enough lift the chug-on-blast department, and deadened chord movements to give the whole project credence.

The guest vocal appearances certainly lend weight to the whole thing – Högbom’s in particular, who has deep enough of a growl to shake the earth, for lack of a better term. And as the song progresses (it chalks in at about 45 minutes), Martinsson starts to layer in some much-needed melodic guitar lines, the perfect offset to the dissonant, heavy, and rhythmic riff offerings found at the song’s onset.

A bold risk for a debut, the ambition found on Aniara MMXIV is only matched by Martinsson’s execution. Not quite a full-fledged extreme metal space odyssey, the album (and Necrosavant as a whole) offers up yet another brain-wringing permutation of black metal.